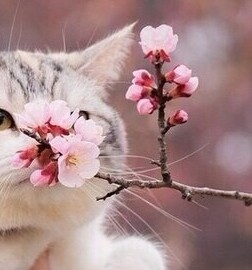 We believe that the strength of a Clan is not measured in the use of it's teeth and claws, though the warriors of spring will not shy away from a battle that must be fought. No, instead virtue and honor is demonstrated in their kindness to strangers, their benevolence to the less fortunate, and their level headedness in the face of those who have less of a stronghold on their emotions and actions. A philosophical group of cats, you might say. Violence only creates more violence. Two wrongs don't make a right. Treat others the way you would wish to be treated. Don't judge a book by it's cover. These are all proverbs the felines of SpringClan live by. Everything is forever in bloom, and both water and prey can always be found without much difficulty.

A vast, mystical land with endless secrets and many attractive sights. Located in the north-eastern area of the Mountain Clans territory is a unique place, filled with countless cherry blossoms, beautiful flower fields, and plentiful waterfalls. It is not easy to forget time spent in SpringClan, as the territory alone is beautiful enough to forever stick in memory, as are the residents that reside there.

Springclan territory is vast, but there are a handful of important landmarks that one should be familiar with while discovering the beauty that is Springclan’s territory. Such memorable landmarks are the Japanese Garden, the Stepping Stones, the Flower Meadow, the Waterfall, the Glade, the Valley, the Four Stones and many more! If you’d like to know more details about Springclan territory, please be sure to visit the TERRITORY, TRADITIONS & FOLKLORE OF SPRINGCLAN thread located in the Springclan Forum!

There is currently no plot.


APPRENTICE — none
CATNAME rped by USER


APPRENTICE — None
CATNAME rped by USER


MENTOR — None
CATNAME rped by USER

BLACKBERRY - ComplacentDevil
Loyal to a fault, Blackberry is a friend to the end. With a coat the shade of night, and eyes the colour of the setting sun, many would call him impending, like the shadows cast by the largest trees at dusk. His brutish appearance, quiet demeanor and secretive past cause many to accuse him of being the cause of many bad luck scenarios, though he has never been proven guilty. Although not a natural borne Springclanner, he has taken it as his home, willing to protect it to the end, and the scars across his body from throwing himself headfirst into border skirmishes and battles are his badges of honour, a proof that he remains loyal to his clan and adoptive family.

JOVIALPAW / frog - faeish
A small black and white tomcat with immersive green eyes. Jovialfrog is a very excitable tom that has a hard time concealing it. His mother was a travelling loner that decided her last remaining kit was dragging her down, and chose to leave him in SpringClan territory as she passed through. Though he has little memory of his mother, he doesn't let his lack of blood family hurt his heart. He knows that he has a family within his Clan, and shows through that his loyalty is to the bone.
MENTOR: None

SOFTKIT / berry - Storm
Before Softkit and her siblings were born, on February 1st, 2022, her Father and Mother had been den-mates from the very beginning of their lives. They continued to be friends and later on when they became warrior's they became mates. When she was born, her mother and two other siblings died. Her mother died trying to give birth to her two still-born kits. Her Father heart-broken and sad, choking on his tears named his kits, Softkit, Tigerkit and Tinykit. After her mother and siblings where buried, her Father disappeared, leaving the tiny she-cat to be raised by the Clan. Her kit-hood was not too eventful. She spends her time alone, hiding in the shadows of the other kits. She watches them play, flinching and worrying about them getting hurt. She soon would find herself wandering around the camp looking around. Only place that she often can be found was the medicine cat den. She often sat at the back or to the side out of the way of the sick, wounded cats and healer, watching and studying the plants. As she reaches her third Moon, she decides to ask the Sect Lord of the Lotus Cove if she could train under them. Her only desire is to learn to heal, to help save lives. She has no other interest in the other sects, and has her heart and desire on this one. She has no desire to take a mate or have kits, but it may change in due time. She likes spending time with friends/family, working, and herbs. Knowing what herbs to use and when, where to find them and what they look like. Healing; diagnosing another cat's illness or injury, and learning about flowers. Softberry dislikes being alone for too long, being pushed away, pushing others away, questionable scenarios, being too crowded, violence, and hunting prey. Her weaknesses are; Hunting any kind of prey, tracking others, hurting other cats, even if they hurt her first. Her hobbies are enjoying walks and studying plants and herbs. She loves to run. She fears; losing a cat due to injuries she couldn't stop bleeding, hurting others, not being able to protect herself due to her fear of hurting others. Softberry's main goal is to learn all about herbs, plants and how to use them. She wants to know how to heal other cats and how to give advice. She is a strong believer in StarClan and even if her Clan was run-over by another and forced to give up on StarClan and their ways, she would rather die, then to give up on her Ancestors and their ways. Softberry will do anything for her Clan, be it healing and giving advice. She isn't so keen on raising her Claws, preferring to use her words and kindness instead. Softberry is a rather small she-cat. She is bigger than an apprentice, but not quite as big as a warrior. She has super soft white fur with brown-gold and tan patches and stripes on her head, ears, back, legs and tail. Her eyes are a light brown-golden hue that are almost always friendly. She is fit and has long whiskers and a light pink nose.
LITTERMATES: None

STAINEDKIT / moss - faeish
A soft looking small calico she-cat with seafoam green eyes. Her outlook on life is anything but serious. Stainedmoss tends to find humor in everything, whether it be the relationships with her family and friends or a kit tumbling to the ground. Due to her inability to take anything seriously, she tends to have a difficult time maintaining friendships. Not many care to keep up with a cat that never seems to feel the severity of the situation.
LITTERMATES: None

CRESCENTKIT / eclipse - faeish
A solid white tom with striking eyes. Taking after his grandfathers, he has one yellow eye and one ice blue eye. Crescenteclipse has a fondness for nighttime and regularly enjoys taking walks at this time. He is a bit antisocial, being hot headed and difficult to communicate with. This tom avoids talking about his emotions at all costs due to his near inability to express himself. Even so, he has a deep loyalty with his siblings and will do whatever he can to help them.
LITTERMATES: Cosmickit, Solarkit, Whisperedkit

SONG OF THE PHOENIX & HER DRAGON
by ѕнαdow✩
DISCONTENTED, I LAUGHED AT THE BLEAK SKY
by ѕнαdow✩
FAMILIAR FIGURES SHIMMER ON THE LAKE
by ѕнαdow✩
UNTAINTED WITH DUST
by ѕнαdow✩
NO GOODBYES & NO SEPARATIONS
by ѕнαdow✩
WITHOUT EXPERIENCING THE STORM, HOW CAN YOU SEE THE RAINBOW?
by ѕнαdow✩
EVERYTHING IS DIFFICULT IN THE BEGINNING
by ѕнαdow✩